Harvest started a little sooner than we expected. After a relatively cool and nearly perfect growing season we were anticipating harvest to start sometime during the first week of October. Until the weather forecasts of rain…rain…rain starting Sunday, September 30th hit. So, the last week of September was a hectic one in the vineyard and the winery. We sampled all of our fruit to determine what – if anything – was ready to be picked. We determined that blocks 10 and 11, our 2 newest blocks planted to Pommard and block 13 planted to Dijon clone 114 were ready. We picked those blocks on Saturday the 29th – at 11 AM –about 8 hours before the rains came in. And did it come – Sunday was a wash out – but thankfully Monday and Tuesday (the 1st and 2nd) were relatively mild with some spotty showers throughout the day and winds of 8-10 mph – just enough to blow away the rain and dry the fruit.

And then we waited…and waited and hoped the fruit would survive the two weeks of wet weather. We were lucky – yes, it did rain each day – but not the torrential rains we feared. From the 29th of September until the 12th of October there were showers each day – but also sun breaks and relatively mild temperatures in the high 50s to mid 60s. The fruit held up extremely well and we harvested and crushed our Pinot noir from the 13th until the 16th. It was all cold soaked and fermented in some 6 stainless steel tanks, 12 macrobins and 2 of the most beautiful French Taransaud wooden fermenters on earth (pictures and more on those fermenters later).

Due to the compressed time frame we had some pretty long days – in the vineyards at 7AM at the break of dawn and shutting down and cleaning up the winery at 3AM the following day. We repeated this process 3 times during the 2007 harvest and our winemaker Robert Brittan tells us we shouldn’t experience anything any tougher with future harvests. Let’s hope he’s right!

Thank goodness we had lots of help this year from family and friends. We could not have done it without all of them. On our first day of crush we were helped by our friends Grae Joor, Paul Sehdev and Mike Wakefield. They did a fabulous job helping us get all of the kinks out of the process as we started our 2007 crush. They were quite effective in helping us process about 4 tons of fruit one afternoon and evening.

The next wave of volunteers arrived and were indispensable from the 13th through 16th and they included our accountant and her husband Betsy and Mike Longacre; our architect Ernie Munch; friends Anita Singh and Leo Jacobs and fellow vineyard owners Jeanne and David Beck. Special thanks to Anita who came to work even after she was rear ended in her car on the way to the winery and was suffering the early effects of whip lash and Jeanne Beck who worked tirelessly on her crutches as she recovers from a broken ankle. And our special volunteer guests this season were my Mom – Joan Morris and my aunt – Ginny Stevens. Mom and Ginny flew in from Boston and worked as our guest chefs as well as on the sorting table.

And then there was the night crew – those who worked late into the night and early morning – Robert, Ellen, Becky and Tom – and of course the professionals Macario and Alberto. Bill and I can’t thank you each enough.

Introducing The Wines of 2007

Those of you who stay close to the wine writers et al – may have already started to hear about the “woes of the Oregon 2007” vintage. We were just days from calling 2007 a near classic growing vintage – those “few days” being the operative words. You see – just a few more days of sun and warm weather the last week of September was what we needed for a near perfect growing season. Instead – it rained. So – we played the odds, as did most of our neighbors, and picked our ripest fruit before the rains so we would have something for 2007. The rest we kept hanging and hoped for the best. In the end, it worked out – the fruit we picked in mid-October ripened further and held up well under the weather conditions. We picked healthy fruit – with lower brix than 2006. We were happy with this outcome as our goal is to produce wine with alcohols of 14% or less. We didn’t achieve that goal in ’06 – but we expect to in ’07.

We also found the color profile of the young 2007 wines to be just beautiful – clear, brilliant and deeper than our young 2006 wines. The flavor profile also seems to be maturing faster. Fermentation was less stressful – we struggled with some stuck fermentations in 2006 – but the 2007s are fermenting to plan. In summary – we LOVE what we’re seeing and tasting to date in the 2007 vintage. They seem to be building towards the wines we strive to produce – feminine and elegant Pinot noir.

We’re expanding our portfolio for 2007 – and adding Chardonnay. Our love of Burgundy and its two great grapes (Pinot noir and Chardonnay) has led us to explore Chardonnay in Oregon. We’ve identified two wonderful vineyards with older Chardonnay nearby. They are the Carabella and Hyland vineyards. To read more about these vineyards and get a peek at them – check out the Vineyard tab on the site.

Here is a breakdown of the wines by lot. Many of you have told me you liked tracking what happened with the lots from journal to journal. So – here goes. You will notice we have more lots this year – in fact twice as many. Our production is more than doubling in 2007 from about 600 cases to up to 1500 including our Chardonnay. 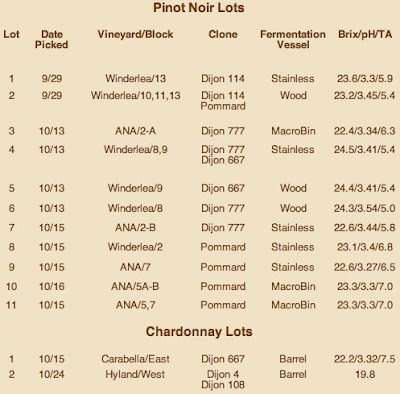